Bosnia and Herzegovina Democracy and Rights

The war of the 1990s still casts its shadow over Bosnia-Herzegovina abbreviated as BIH by Abbreviationfinder. The contradictions between the three dominant ethnic groups remain and society is characterized by political deadlock, corruption and heavy bureaucracy. The work of putting war criminals to justice is slow.

Elections are held regularly, there is political diversity and the opposition can act freely. However, the split between ethnic divides contributes to the pressure on voters, as well as certain restrictions on assembly and organizational law. Irregularities and sometimes violence are reported mainly in connection with local elections. The institutions are weak and the relationship between state power and the two regions, the entities, is sometimes unclear. In many cases, laws, statutes and jurisdictions overlap.

The Council of Europe warned in 2019 Bosnia’s leadership of ominous signals that the country could not live up to its commitments in terms of “democracy, the rule of law and human rights” (see Calendar). Bosnia was expelled from the Parliamentary Assembly of the Council of Europe as it failed to appoint a delegation to the Assembly. Similarly, Bosnia had just failed to appoint a liaison to European police cooperation Europol.

In rankings of political and civil rights, Bosnia and Herzegovina gets the worst ranking of all Balkan countries. The Economist Intelligence Unit classifies Bosnia as a “hybrid regime”, the third of four categories where the fourth is “authoritarian regimes” (which certainly applies to some other Balkan countries as well). In Transparency International’s ranking of 180 countries based on corruption levels, Bosnia ranks 101st. It is similar to other countries in the region such as Serbia, Kosovo, Northern Macedonia and Albania (for the full list see here).

One problem with the political system, which is a result of the war, is that in practice it gives the various peoples veto rights (see Political system). To a large extent, this has hit politics – and thus also democratization, development work and economic progress. The European Court of Human Rights ruled in 2009 that minority groups are being discriminated against by the Constitution, since they are excluded from political office. The case involved two people, a Jew and a Roma. Politicians have discussed a constitutional change since then, with no results. In 2014, the Court again declared that the Constitution had to be changed, in a new case that applied to a person who just wanted to be identified as a Bosnian citizen, without any particular ethnicity. Bosnia’s Constitutional Court has also concluded that the Constitution discriminates against religious and ethnic minorities.

The situation is not facilitated by strong separatist forces in one of the country’s two entities, the Republika Srpska, questioning the legitimacy of Bosnia and Herzegovina as a nation.

Freedom of the press and freedom of expression prevail according to the constitution, and no formal censorship exists. Media legislation in Bosnia is described as one of the most liberal in the world, but deficiencies in the judiciary do not always have the legal impact. Journalists are often exposed to threats and political pressures, as well as physical attacks.

The media landscape, like society in general, is polarized and fragmented. Most media companies have owners with ties to any political grouping or group of people and are at least indirectly controlled in their reporting.

In Reporters Without Borders index of freedom of the press in 180 countries, Bosnia ranks 58th (for the full list see here). It is a step better than the neighboring country and EU member Croatia, and significantly better than the other former Yugoslav republics with the exception of Slovenia (which is closer to Western Europe in terms of democracy and rights). Nevertheless, RUG describes how the political climate with verbal attacks and fierce nationalist rhetoric contributes to a hostile environment for the media.

In Republika Srpska, a law was passed in 2015 that extended the definition of “public place” to the Internet. Many saw this as a clear threat to journalism and the use of social media in general.

Before and during the war, the media played a major role in spreading propaganda that undermined ethnic contradictions and contributed to the outbreak of war. Even today, nuanced news reporting contributes to curbing mistrust among the country’s people groups, even in media that call themselves independent. This is very much the case in public service.

There is also an overstating of media which causes many to have financial difficulties, which makes them more susceptible to economic and political pressures. Journalism is characterized by low wages and high unemployment.

The justice system is characterized by bureaucracy, lack of resources and political pressure. Trials often extend over time for years, and cases appear to be balled between the various bodies. Many cases are closed due to procedural errors, such as the disappearance of evidence. The ruling in the national constitutional court does not always have an impact on the entities. The death penalty was abolished completely in 2001.

Police and prison staff are accused of harsh treatment of arrested and imprisoned persons. The conditions in the prisons are in many cases bad and the overcrowding is great.

The legal aftermath of war crimes committed during the Civil War (see also Modern History) was initially handled only by the United Nations Criminal Tribunal for the Former Yugoslavia (ICTY), established in The Hague in 1993. Most of its objectives concerned the war in Bosnia, and by the 161 people charged were the majority of ethnic Serbs. Among the most sought after were the Bosnian Serbs’ highest political and military leaders, Radovan Karadžić and Ratko Mladić. They were left on the loose for a long time but were eventually arrested in Serbia, 2008 and 2011 respectively, and brought to the Hague Tribunal where they were charged with, among other things, genocide. Karadžić was first sentenced to 40 years in prison but appealed and got the sentence sharpened to life in March 2019 (see Calendar). Mladić was sentenced to life imprisonment in November 2017 (see Calendar).

Already in 2005, a special war crimes chamber in the nationwide Bosnian court began its work, to relieve the Hague Tribunal whose mandate expired in December 2017. The chamber, which was also supposed to be able to prosecute a larger group of suspects, has until 2019 prosecuted just over 800 people, of which approximately half convicted of crime. The work is slow considering that, still, a quarter of a century after the war, there are estimated to be around 5,000 suspected war criminals who have never been tried. 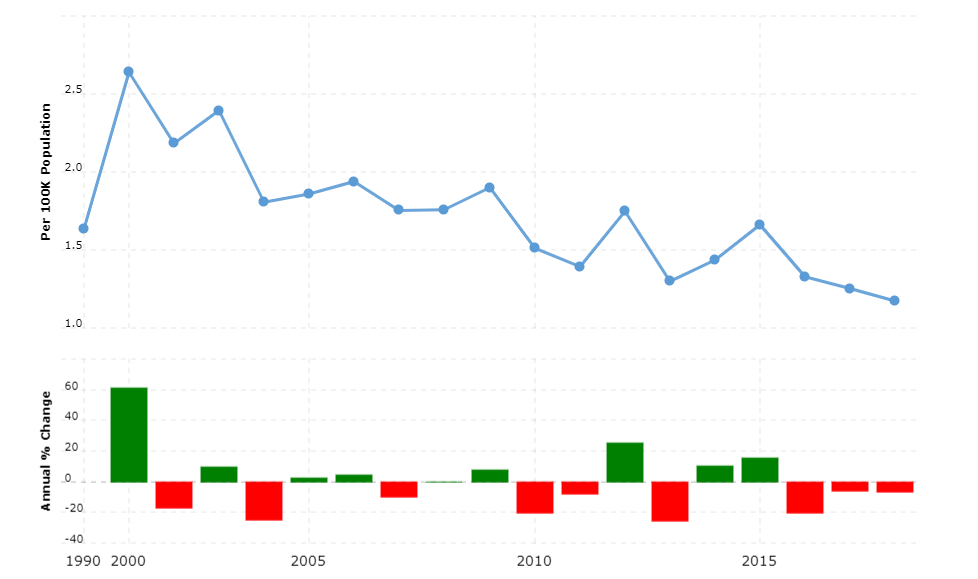