Abbreviated as UEM by Abbreviationfinder, Northern Macedonia is struggling with great internal contradictions, which has contributed to undemocratic tendencies. Politics is characterized by fierce rhetoric, boycotts and pure violence. The administration is politicized, corruption is widespread and the media has been heavily crowded by state power. However, the situation has brightened recently, even though polarization remains.

The two dominant parties leading the government have tended to equate their party with the state, as during the communist era. Important items have gone almost exclusively to party members. Instead, the party that is in opposition has often boycotted the work of parliament.

Elections are held regularly, but they are often characterized by threats, violence, voting and other cheating. Leading representatives of political parties have also been engaged in fierce campaigns against opponents, which have sometimes become tangible. The most serious case occurred in April 2017, when members of the nationalist party VMRO-DPMNE stormed Parliament and seriously injured several people (see further below and Current policy).

In political and civil rights rankings, Northern Macedonia falls in the lower tier of Balkan countries. The valuation was exacerbated by the eavesdropping scandal that was revealed in 2015 and was considered to show how the then nationalist government devoted itself to advanced electoral fraud, corruption, governance of the judiciary and surveillance of citizens. In the long run, this led to new elections and eventually a change of government (see Current policy). Development has since improved and the new government is praised for, among other things, the willingness to compromise. However, the Economist Intelligence Unit still classifies Northern Macedonia as a “hybrid regime”, the third of four categories where the fourth is “authoritarian regimes”.

Corruption is widespread and impunity is widespread among those in power, both in politics and the economy. In Transparency International’s ranking of 180 countries based on levels of corruption, Northern Macedonia is in the 106th place. Together with Albania, Northern Macedonia thus has a bottom position in the region, slightly worse than Bosnia and Kosovo (for the full list see here).

The constitution guarantees freedom of expression and free access to information, but in fact independent media have a difficult time operating freely. Journalists and activists are subject to political pressure and harassment. Physical accumulation also occurs, although it has declined in 2018 compared to previous years. The situation regarding freedom of the press deteriorated for a number of years, but the trend has now broken.

In Reporters Without Borders index of freedom of the press in the countries of the world, Northern Macedonia fell over a ten-year period, from the “top listing” 34 to 109 (out of 180 countries). The reasons were, for example, legal harassment, often with bad legislation as a basis, as well as physical and psychological violence against journalists. But in 2019 the rating improved significantly. Northern Macedonia climbed a full 14 steps, passing Montenegro and leaving the bottom rank among the former Yugoslav republics. In 2020, Northern Macedonia climbed another three steps, to place 92 (for the full list see here).

The polarization in politics is largely reflected in the media. The Macedonian nationalist government of 2006-2007 was strongly supported by several evening newspapers, of which a few, however, went bankrupt. Public service was also heavily governed by the national government, and that bias continued to begin with after the May 2017 power shift, pending new legislation.

Already in 2011, the journalist union and the OSCE warned that media freedom in the country was seriously threatened, after three government-critical newspapers were forced to close because of alleged tax debts. The following year, the government introduced new rules where journalists charged with slander were forced to apologize or risk very high fines. In 2013, a journalist was sentenced to four and a half years in prison for revealing the identity of a witness in a murder trial. According to critics, the verdict was a revenge for the reporter revealing police and legal abuse.

At the end of 2013, after an intense debate, Parliament passed a law on stronger regulation of the media. This happened despite strong protests from journalists and an invitation from the OSCE to choose self-regulation for the press instead.

Ownership concentration is high in the media sector and self-censorship is widespread. Corrupt links between authorities and media owners are a problem. In addition, financial difficulties have also affected press and etheric media in the form of declining editions, falling revenues from license fees and bankruptcies.

According to the Constitution, the courts must be independent of the political authorities, but this is not always the case. Although improvements have been made as Northern Macedonia gradually adjusts its legal system to EU requirements, much remains to be done. Among other things, conditions for inmates at various institutions, including psychiatric care, have been criticized by the UN.

Nor is there any equality before the law. A voluntary organization to take advantage of the rights of the inmates claims that while arrested, high-ranking people do not have to wait very long to be tried, “ordinary people” may be imprisoned for up to a year pending trial, though often is just about petty crime. The deficiencies in legal security can be partly attributed to such things as unclear laws, lack of competence and resources. Low wages in the judiciary also contribute to widespread corruption.

In the fall of 2015, a special court, SJO – led by three women, was established with the task of investigating crimes among the power holders following the interception scandal.

The storming of Parliament in 2017 has resulted in 16 people being sentenced to prison for up to 18 years (see Calendar). Among several high-ranking leaders who are still under investigation for planning the attack are Nikola Gruevski, who was Prime Minister from 2006 to 2006. Gruevski has also been sentenced to two years in prison for corruption, but is in Hungary where he has moved under spectacular forms and subsequently has been granted asylum (see Calendar). 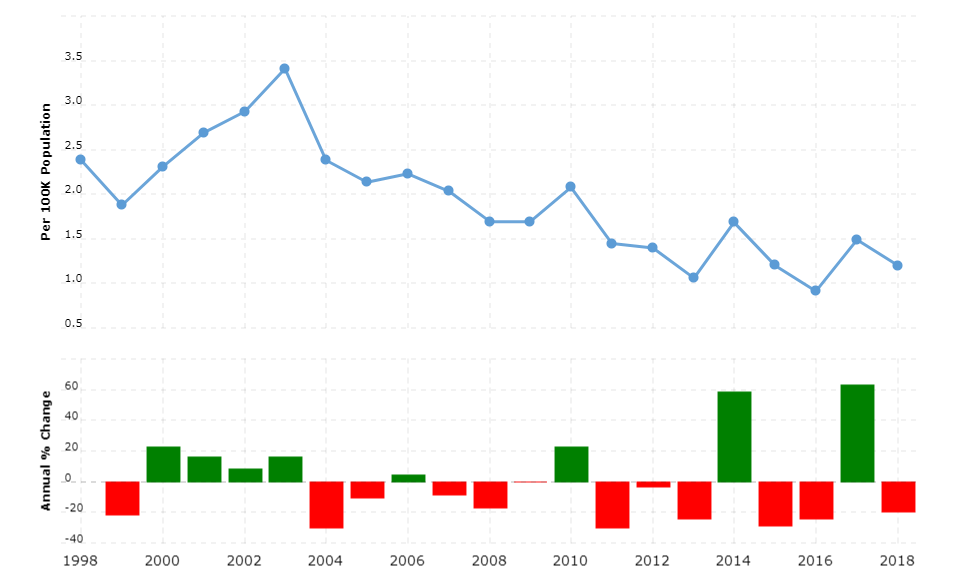