Abbreviated as ROM by Abbreviationfinder, Romania has functioning democratic machinery and the civil liberties and rights are generally respected but the system is clouded by corruption, discrimination against minorities and deficiencies in the media and the judiciary.

Free and fair elections are made at regular intervals. As a rule, the authorities respect the freedom of assembly and opinion. Romanians can freely organize themselves in parties and other organizations and express their views, for example through demonstrations.

The right to strike is enshrined in the Constitution (see Labor Market) as well as religious freedom and protection of religious minorities (see Religion).

Nevertheless, Romania is ranked as a “democracy with deficiencies” in The Economist’s assessment of the world’s countries. The factors that lower Romania’s ratings include the extensive corruption and recent legislation that adversely affects the independence of the judiciary (see below).

While the constitution guarantees that human rights are respected, the EU and human rights organizations have repeatedly criticized Romania for discriminating against its minority people, especially the Roma. This is done, among other things, because the Roma do not have access to adequate education, good care and acceptable housing. Violence and harassment against Roma occur, both from the authorities and individuals (read more under Social conditions).

The law prohibits all forms of discrimination on the grounds of gender, but like most other countries, Romania has a long way to go when it comes to gender equality (read more about the rights of women, children and sexual minorities in Social conditions).

The law guarantees freedom of the press and opinion and the state does not conduct censorship. The media landscape is mixed. There are a number of independent media, but also media linked to parties or politicians accused of spreading propaganda. Sometimes problems arise for media who want to report freely and critically. Political and economic pressures from local politicians and businessmen, as well as pure threats, exist, especially against regional media that have written about corruption and other abuses of power.

Freedom of the press was previously limited by provisions of the Criminal Code that could give prison or high fines for insult, slander and news that were considered to harm the country’s honor and interests. After several legal trips in the 2000s, the Supreme Court (HD) in 2010 ruled that media slander was not punishable. In 2013, however, the Constitutional Court said that the HD decision violated the Constitution. As a result, there was uncertainty among the country’s media workers about what they could write and say.

The public has the right to demand certain information from authorities, but it is not always that the authorities comply with the law in this regard.

Corruption is a widespread problem and occurs at all levels within the social apparatus, in the justice system, the police and business. In Transparency International’s latest assessment, Romania ended up in the bottom of the EU countries (see ranking list here). Only Bulgaria got a worse position. However, other neighboring countries such as Ukraine, Serbia and Moldova were significantly lower down the list.

Since 2002, there is a special authority called DNA (Direcția Națională Anticorupție) which has the task of fighting corruption. DNA has been countered from various angles, including by governments and the parliament, but in the 2010s, a number of former ministers and senior officials were convicted of bribery and embezzlement. In 2015 alone, the anti-corruption authority brought 1,250 prosecutions. Among the defendants were five ministers, 21 MPs and the former prime minister Victor Ponta. Nearly 500 executives for companies or government were also prosecuted. The prosecutor’s office received 970 convictions.

Since the beginning of 2017, the government, led by the Social Democratic PSD, has made a number of attempts to change the judicial system with a view to mitigating the punishment for corruption crimes and making corruption investigations more difficult (see Current policy). The reforms that aroused great resistance within the country and were heavily criticized by the outside world were interpreted as an attempt to prevent party leader Liviu Dragnea, who was convicted of abuse of power, from going to prison. When Dragnea’s Dragnea appeal was rejected and he was really jailed in the summer of 2019, the government backed down and announced that it was now releasing the reform plans.

Under the Constitution, the courts must be independent of state power and everyone should have the right to a fair trial. In many cases it works that way, but it seems that judges and prosecutors are subjected to pressure from politicians, businessmen and other authorities. The judiciary is also plagued by a lack of lawyers and other resources.

Anyone who is prosecuted and needs legal help can get a representative paid by the state.

In connection with Romania’s adaptation to the EU ahead of the Union’s entry into the Union in 2007, a number of initiatives were taken to increase legal certainty and the EU demanded anti-corruption measures and measures against legal system deficiencies. Romania and Bulgaria were subjected to a control system called the Cooperation and Verification Mechanism. This means that the countries have been given the task of implementing a number of reforms and that each year the EU assesses whether the countries have achieved their goals or not.

The police force has been criticized for cases of mistreatment and harassment of detainees and prisoners. Deaths due to abuse have also been reported. The country’s Roma are particularly vulnerable and they often appear in crime statistics. The Roma are also over-represented in the country’s prisons.

The death penalty was abolished in 1989. The last execution was carried out that same year.

Romania has only partially addressed the Communist era’s violation of citizens’ rights. It was not until 1998 that persons who were members of or who cooperated with the secret police, Securitate, were prohibited from holding political assignments. In 1999, Securitate’s archive began to be opened to the public. In the same year, two generals, one of whom was Deputy Minister of Defense, were sentenced to 15 years in prison each for ten years previously ordering the police to open fire against protesters the city of Timişoara. The unrest in Timişoara became the prelude to the rebellion that led to the fall of communism during the Christmas holidays of 1989 (see Modern History).

In November 2016, a formal investigation of suspected crimes against humanity began during the uprising, when more than 1,100 people are estimated to have been killed.

A month later, military prosecutors brought suits before the Supreme Court against former President Ion Iliescu, former Prime Minister Petre Roman and several former senior officials for crimes against humanity. They were accused of having committed a specific act of violence against protesters in June 1990, when at least four people were killed and over 700 injured in Bucharest (see Modern History). In December 2018, another charge was brought for crimes against humanity against Iliescu: he was accused this time of having misrepresented information at press conferences during the 1989 uprising, resulting in chaotic firing and conflicting military ordering.

A total of 275 people have been prosecuted for crimes committed during the uprising but reportedly only a few dozen have been convicted. 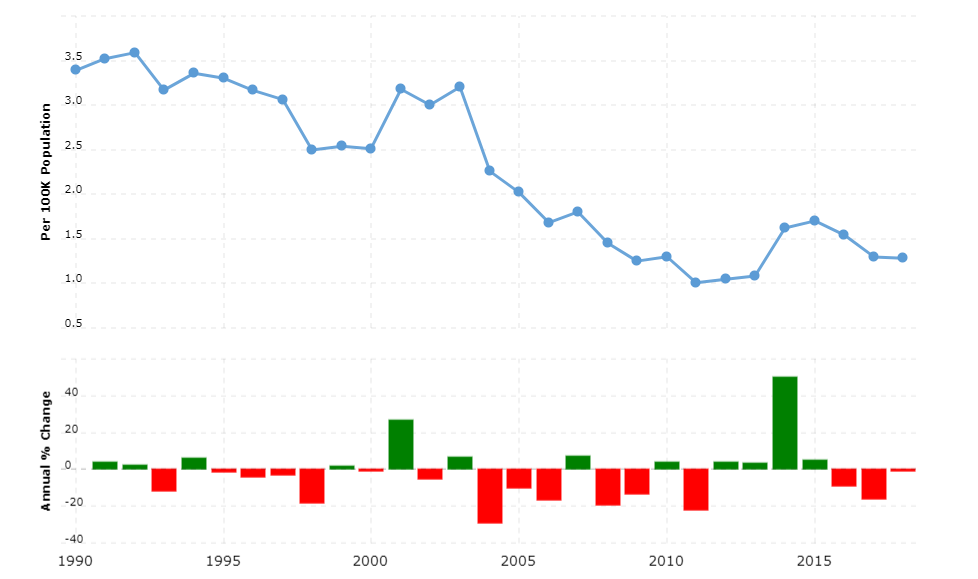