Boredom is a foreign word in California, because the abundance of excursions and activities is almost endless. The state is ideal for round trips and road trips with your own rental car. In this way, you can combine several regions at your very own pace.

Below we present you the most exciting tours, most beautiful attractions and best sights in California. 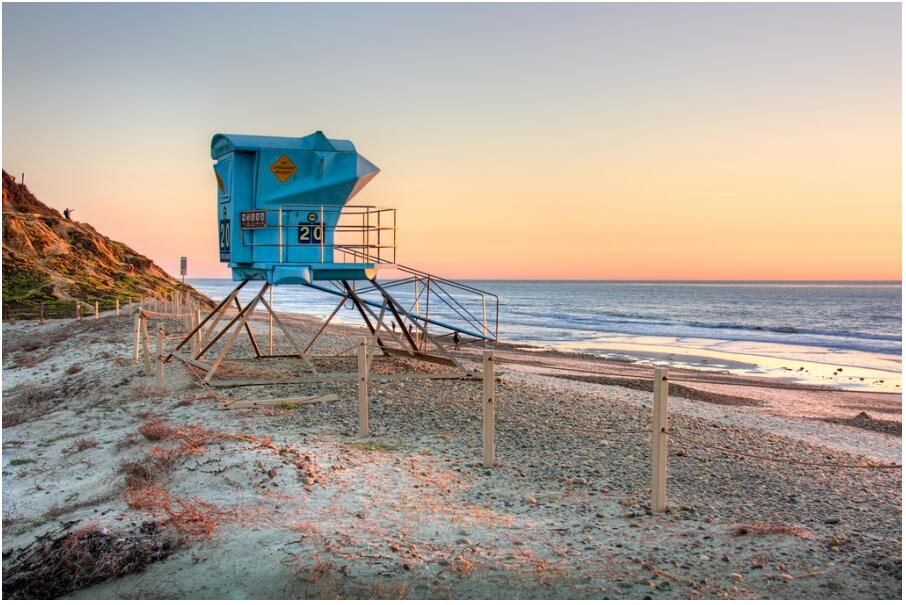 If the northwest coast of California is known for one thing, it is its forests of gigantic redwood trees. In the consistently moist, often mist-shrouded forests, the sequoias thrive and reach a height of up to 115 meters. No wonder that the majestic backdrop was used as a filming location for the forest moon Endor in the third part of Star Wars.

The Redwood National Park was declared a UNESCO World Heritage Site in 1980 and is a paradise for hikers and cyclists. The visitor center provides information about the multitude of hiking trails and you can also learn more about the ecology of the park here. If you are lucky, you will see shy visitors in the vastness of the redwood forest, for example Roosevelt moose and giant salamanders.

John Muir, the American “father of the national parks”, was amazed when he set foot in the Yosemite Valley in eastern California for the first time in May 1868. He spent the next ten years exploring the mountains, forests, and lakes of this first national park in the United States. There are diverse ecosystems at an altitude of 600 to 4,000 meters.

Unique soils allow plant species to sprout that attract thousands of butterflies. Visitors stroll in the shade of the sequoia trees, follow crystal clear rivers and let their gaze wander over the Bridalveil waterfall. If you want to sniff the mountain air, climb the granite mountain Half Dome at dawn. At the Ansel Adams Gallery, guests marvel at historic black and white prints of the landscape, and the Yosemite Museum displays relics of the Ahwahnechee Indians who once lived in the valley.

3. Big Sur on Highway One

A road trip on the Pacific coast is a must when visiting the Sunshine State. California has many scenic routes to feel the vastness of the country and the fresh sea breeze, and one of the most beautiful is Highway One from San Francisco to San Diego. Along the rugged rocky coast, visitors drive through the sparsely populated area of ​​Big Sur and cross the Bixby Bridge – a sight known from numerous car advertisements.

Stop at the side of the road to your heart’s content and keep an eye out for California condors in the sky. With a bit of luck you will see sea lions, otters and gray whales off the coast. And if you feel like bathing yourself at the surf, make a stop at Huntington Beach.

Few structures have the cult status of this bridge, which opened in 1937 and is considered one of the modern wonders of the world. Once the longest suspension bridge in the world, this engineering masterpiece stretches 1.3 kilometers over the Bay of San Francisco. The orange paint was originally only used to protect against rust, but the residents liked it because it matched the landscape and made the building famous.

Visitors are free to choose whether they want to drive across the Golden Gate Bridge, take a bike, or walk. You can stop in a hard shoulder and let your gaze wander to the prison island of Alcatraz. A special highlight is a night drive over the bridge towards the glittering skyline of San Francisco.

When it comes to California’s top attractions, one city is often forgotten: San Diego. The state’s second largest city is full of attractions and highlights, offers a very special flair and is much less agitated than Los Angeles, for example. The most important visitor magnet in the city’s harbor is the gigantic USS Midway Museum on a former aircraft carrier.

Even non-military fans get exciting impressions here and can better understand a piece of American identity thanks to the very good audio guides. The Gaslamp Quarter San Diego is a charming area during the day and turns into the nightlife of the city. A day trip to La Jolla, where you can marvel at large colonies of seals on the beach, is definitely recommended. Make sure to hit the rugged cliffs of the Sunset Cliffs Natural Park at sunset! 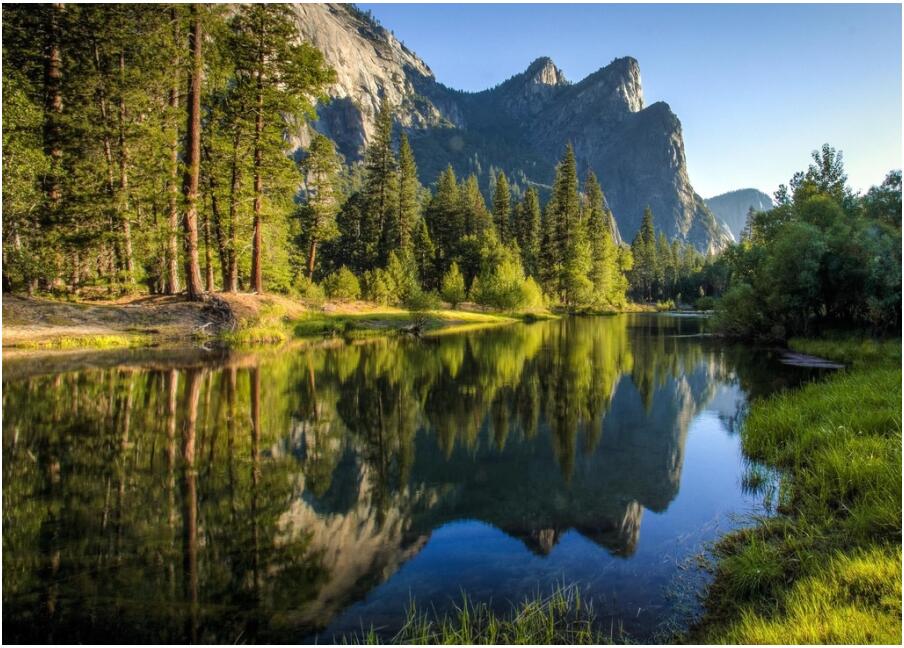 California shows itself from a lesser known side in the Napa Valley on the west coast. One hour north of San Francesco there are more than 400 wineries. No wonder, as the Mediterranean climate ensures that Cabernet Sauvignon, Zinfandel and Chardonnay grapes of world-famous quality grow here. Almost 5 million tourists visit the wine-growing region annually – this puts Napa Valley on the list of the most popular attractions in California, second only to Disneyland.

In spring the landscape is dominated by the lush greenery and yellow flowers of the mustard plants, while in summer guests are enticed with wine tastings. One of the most impressive wineries is the Castello di Amorosa, where visitors marvel at the replica of a castle from the 13th century – a worthy setting for fine wines.

Visitors looking for a behind-the-scenes look at Hollywood’s dream factory should head to Universal Studios in Los Angeles. Formerly only the starting point for tours to the studios of the film company, one of the most visited theme parks in the USA has emerged there over the years.

The park’s rides take guests into the prehistoric setting of the film “Jurassic Park” and the Harry Potter village of Hogsmeade, while fans of the animated series “The Simpsons” visit replicas of Moe’s Tavern and Krusty Burger. Hollywood stuntmen put their skills to the test at the WaterWorld show, and visitors get up close and personal with creepy zombies in the Walking Dead Attraction. Those who like it more relaxed can visit NBC Universal, a museum with movie costumes and props.

No other amusement park in the world has as many visitors year after year as Disneyland in Anaheim, California. Opened in the 1950s, the park has been steadily expanded since then and today consists of 8 “countries” with a wealth of sights and attractions. The iconic Sleeping Beauty Castle rises in “Main Street USA”, while the tropical Adventure Land houses a jungle roller coaster and Tarzan’s tree house.

The haunted house in New Orleans Square is a spooky experience, and in Frontierland visitors are whisked away into the time of the Wild West – including a saloon and western show. Guests experience wet and happy pleasure at the Splash Mountain wild water ride, and in Fantasyland you feel like you are in a Bavarian village. Numerous other sights make Disneyland an attraction that leaves no room for boredom.

Visitors can experience the glitz and glamor of Hollywood on Hollywood Boulevard, which stretches from Sunset Plaza Drive to Sunset Boulevard in Los Angeles. Here guests come very close to their favorite film stars – not the real people, but the stars with which they were immortalized on the Hollywood Walk of Fame.

Other celebrities have left their hand and footprints in the entrance area of ​​the Chinese Theater. Opened in 1972, the theater is now a state-of-the-art cinema that has already hosted Oscar awards. Those who not only want to see their idols, but also touch them, can visit the Hollywood Wax Museum. In addition to real film stars, film monsters also populate the museum.

Hardly any other place in the USA is as hostile and at the same time as beautiful as Death Valley National Park in southeastern California. The highest temperatures in the world were recorded in 1936 in this region of extremes. It is the driest place in North America and at the same time the deepest – 86 meters below sea level.

Here are the mysterious singing rocks, bizarre colored sandstone canyons, sand dunes of impressive size and extensive salt pans. In spring, however, the landscape changes radically. Then wildflowers bathe the desert that has come to life in a sea of ​​golden blossoms. 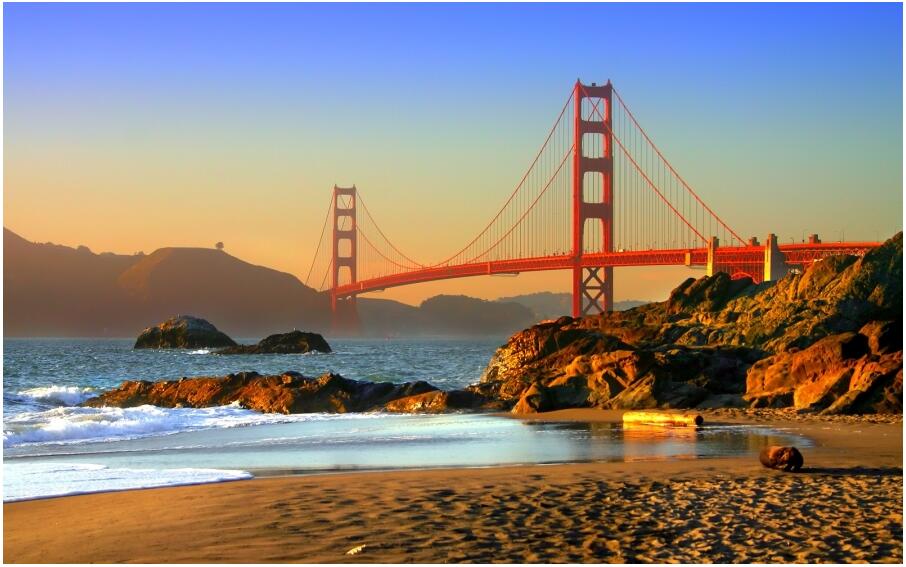